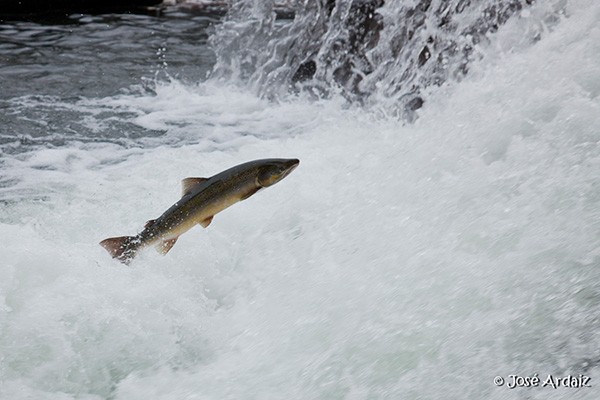 The Atlantic salmon is a migratory species. Born in rivers, it migrates to the sea and returns to its natal river to reproduce after a variable period of time ranging from one to three years. Its average weight ranges from 1.5 to 7 kg depending on its sea age. Its colouring is similar to that of the trout in its juvenile stage and silvery when it returns to the sea.
The species has become a good indicator of river quality as it is very particular about where it chooses to spawn.

Populations are currently known to exist in the basins of the Rivers Bidasoa, Urumea and Oria. Salmon are usually found in the middle and lower courses of rivers during the breeding season and juvenile phase.
The population in the Basque Country has declined over time and even disappeared altogether from all the Cantabrian basins, save that of the Bidasoa, between the late nineteenth century and the first half of the twentieth. In the River Bidasoa, the Atlantic salmon is distributed and breeds almost entirely in the Navarrese section of the basin. The factors limiting its expansion include the presence of obstacles and dams, deterioration in water quality, reduced flow and overfishing.
For about 20 years, the Provincial Council of Gipuzkoa has developed Atlantic salmon management and reintroduction plans to favour those basins where breeding takes place. In the River Leitzaran, the species has been designated a keystone species and various conservation measures, including the removal of obstacles, have been defined.
There has been a capture station in the Navarrese part of the River Bidasoa, in the village of Bera, since 1980 in order to systematically monitor the adult population.