IrekiBai > News > LIFE IREKIBAI, in an international meeting on the removal of dams

LIFE IREKIBAI, in an international meeting on the removal of dams

On 22 and 23 May, the LIFE IREKIBAI project took part in the meeting held in Tallinn (Estonia) to share experiences on the removal of dams, organised by Dam Removal Europe. With the motto “Let it flow”, speakers from different countries shared the results of their work in this area. Technicians from the Basque Water Agency – URA – explained how they tackled the demolition of the Inturia dam and the main results of the monitoring that has accompanied this action.

The range of working scenarios that exist on a European level was debated at the meeting. This started with the hosts, Estonia, and given that it is a country with a maximum elevation of 180 m, sediment management does not have the same importance as it does for us. The administrative diversity also resulted in debate, especially due to the differences between countries with organisations equivalent to our Public Domain Water, and, more frequently, others such as Denmark or Germany, where the private ownership of bodies of water and their surroundings hinders conservation actions such as those discussed.

Regarding points of agreement in the meeting, the main one was the need to raise awareness among the population and disseminate the benefits arising from removing dams. 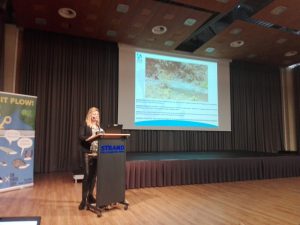