Sponsored the first salmon of Bidasoa

The fish farm of Oronoz-Mugaire hosts since last Sunday, the 26th, the first sponsored salmon on the Bidasoa river. The 4,840kg and 750mm specimen was caught fly by a fisherman from the Fishermen’s Society of the Nazas del Bidasoa in the well named Montoia. The fisherman, following the program “Sponsor a salmon from Bidasoa” has donated the salmon alive to the Department of the Environment so that it can be used as a reproducer and proceed to the recovery of the species.

After catching the salmon, the fisherman gave notice to the Environment Guard, as indicated by the Department of the Environment to fishermen wishing to participate in the program. The guards immediately took over the salmon and transferred it to the Oronoz-Mugaire fish farm. There, a preventive treatment against the infections was applied to him and the wounds that he presented were cured, probably coming from the collision with some network in his marine transit from the seas of the north of Europe to the Bidasoa river. In the absence of genetic tests to certify the sex of the animal, as they advance from Guarderío “it seems that it is a female, who survive until winter could produce about 9,000 eggs, whose fry will be used to repopulate the river , thanks to the second opportunity that this fisherman has granted to salmon ”.

A year and a half ago, the Department of the Environment launched the “Sponsor a Bidasoa salmon” program in order to contribute to the recovery of this species. In this way, some of the fishermen have begun to donate live caught salmon voluntarily.

The person who captures a specimen and wishes to sponsor it can decide the final destination of the donated salmon, choosing to deliver it to the fish farm of Oronoz-Mugaire for use as a player, or release it prior to implanting a transmitter that allows the technical staff of the Department to make a tracing. In this option, the donor is provided with information on the evolution of the specimen. With this action, fishermen and fishermen become important actors in the recovery of the species.

The volunteer program “Sponsor a salmon from Bidasoa” is part of the river custody protocol signed with several fishing associations in the Bidasoa basin and the General Directorate of Environment of the Government of Navarra, thanks to the support of the project LIFE IREKIBAI. Specifically, the Fishermen’s Association of Las Nazas signed this protocol in 2017.

The signing of these protocols aims to consolidate the joint work in fish management that has been carried out since its origins, as well as to advance in the realization of more environmental conservation and dissemination activities among its associates and among the citizens. Its objective is that the conservation of these ecological values ​​results in the benefit of the fish species and the habitats of the basin, but also of the localities involved.

On April 14, the salmon fishing campaign began, with a low flow due to low rainfall, which has affected the presence of salmon in the Bidasoa River. On April 17 the “Lehenbiziko” was captured, and since then ten have been captured. It should be noted that as a protection measure, the campaign has been temporarily closed, between May 27 and June 13.

All salmon caught to date are large salmon, with two sea winters (called multi-winter) and above 4kg and 700mm. 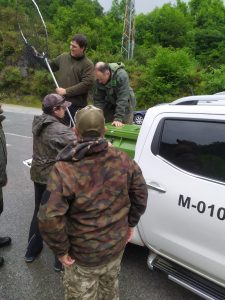 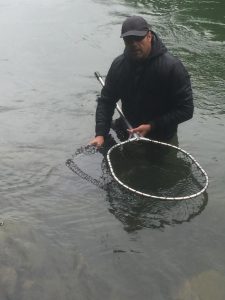