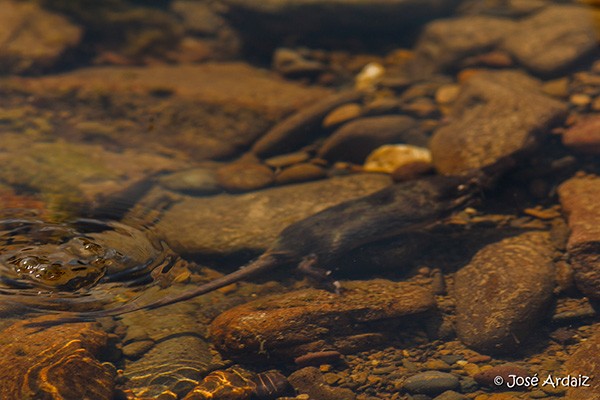 The Pyrenean desman is a mammal which inhabits the banks of mountain rivers and streams with permanent, clean, well oxygenated water. Its distribution is limited to the Iberian Peninsula and it is currently in a critical situation. The limited lengths of the stretches of river suitable for its subsistence (all under 10 kilometres) and the fact that they are isolated from one another means that unless action is taken to recover them, this species could well disappear from our rivers within a period of 10 to 20 years.
In addition, while well adapted to the aquatic environment, the desman can only survive in rivers with large numbers of invertebrates on the riverbed, as it needs to feed constantly. This food source can be found in those headwaters of rivers in an excellent state of conservation, but is in short supply in dammed areas. So the problem posed by the physical barrier of a dam is compounded by the fact that the desman is unable to cross the pools of water dams form due to the lack of food.

Although present in the past, surveys carried out in the last four years in the Leitzaran River have failed to capture a single example of this species.
The River Urumea does not have a stable desman population in Gipuzkoa, although the species can be found in the headwaters of the river. In the Navarrese basin of the River Leitzaran, its presence has been registered recently in the three main streams which feed the river: Gorriztaran, Astomela and Erasote.
In recent times, the Navarrese basin with the largest area of habitat suitable for the desman has been that of the Bidasoa. Over the last 30 years, its presence has been documented in the Endara, Ezkurra, Ameztia, Ezpelura, Zeberia, Aiantsoro, Amaiur and Baztan streams, although the conservation status of the habitat apt for the desman is generally poor. The most significant pressure on the population comes from hydroelectric power stations, a pressure which is intense both in this basin and in that of the River Urumea.