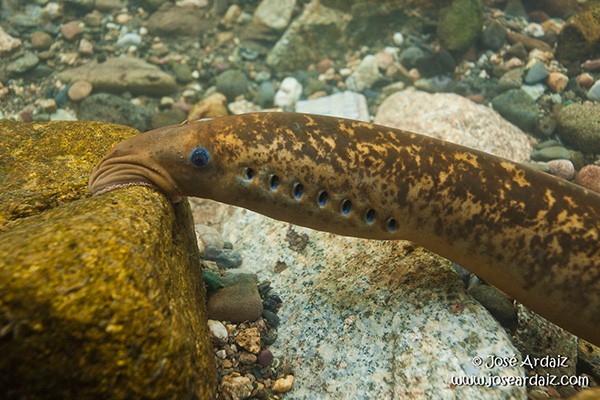 The sea lamprey is a migratory species which is born in rivers, where it spends its larval stage until it acquired its adult form. Adults live in the sea for 20 to 30 months at depths of 200 to 300 metres, mainly parasitising fish, and on reaching sexual maturity, they return to rivers to complete reproduction. The species’ upstream migration begins in February and lasts until May.

The sea lamprey is a very peculiar-looking fish not unlike an eel. Its main feature is a mouth in the form of a circular orifice with teeth but without jaws. The largest specimens can reach 70 cm. Its brownish body with some lighter spots is devoid of scales.
The principal threats to the species are the pollution of estuaries, dams, gravel extraction and pipes. Sea lamprey populations are in steep decline all over the Peninsula. Its distribution at peninsular level is limited to the Cantabrian, although it has zero presence in most of the basins.

In Navarre, the lamprey is only present in the Bidasoa. Although its presence in the Las Nazas stretch was already known, the results of a study conducted in 2013 confirmed that some individuals manage to pass the Las Nazas dam, probably favoured by the remodelling of the fishway past the obstacle in 2007. A lamprey nest has also been located for the first time just below the San Martin dam, now the highest point upstream where the species has been recorded to date.
The sea lamprey is one of the keystone species designated in the SAC "River Bidasoa" and the insurmountable obstacles in the river are the main factor determining its conservation.